History of the Company:

We are located in Tucson, Arizona, less than 20 minutes from the Tucson International Airport.  Our property spans one acre and our facility occupies over 20,000 square feet of manufacturing and office space. We are a competitive employer and have built a well-trained, quality-conscious work force.

Many of our wound film capacitor and electronic filter drawings date back as far as the 1950s. We have proudly served the military and private industry with quality components for over 60 years. While we are proud of our past, we are constantly working toward developing new products for the future.

When considering manufacturing pertaining to wound film capacitors, Arizona Capacitors is your destination for standard and custom components. If you do not see what you need listed on our website or in one of our catalogs, give us a call for your solution. We can design a product to meet your specific needs. 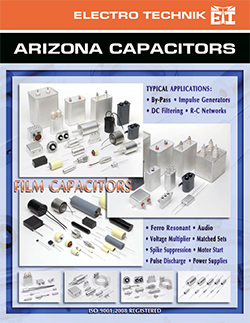 Listing of all Electro Technik companies with their complete contact details.